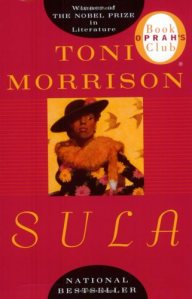 Intense, haunting, and beautifully, beautifully written. I now know why Toni Morrison wins so many awards. At 174 pages, this story is short but so thoroughly, strangely alive I couldn't possibly imagine it being any other way. It's almost as if the things that are left out are part of its substance. There is an elephant in the room for a large part of Nel and Sula's friendship that Morrison handled so deftly it gave me goosebumps. I don't think I'll ever be able to look at the surface of a river again without thinking about 'the closed place in the water' and 'something newly missing.' As an author she reminds me of Cormac McCarthy and Dostoyevsky for her psychological insights. It's not light, easy reading, that's for sure, but certainly very authentic.

This rich and moving novel traces the lives of two black heroines from their close-knit childhood in a small Ohio town, through their sharply divergent paths of womanhood, to thier ultimate confrontation and reconciliation.


Nell Wright has chosen to stay in the place where she was born, to marry, raise a family, and become a pillar of the black community. Sula Peace has rejected the life Nel has embraced, excaping to college, and submerging herself in city life. When she returns to her roots, it is as a rebel and a wanton seductress. Eventually, both women must face the consequences of their choices. Together, they create an unforgettable portrait of what it means and costs to be a black woman in America. (back cover)

But the demands of feeding her three children were so acute she had to postpone her anger for two years until she had both the time and the energy for it. pg32

Sula never competed; she simply helped others define themselves. pg95

Good taste was out of place in the company of death, death itself was the essence of bad taste. And there must be much rage and saliva in its presence. The body must move and throw itself about, the eyes must roll, the hands should have no peace, and the throat should release all the yearning, despair and outrage that accompany the stupidity of loss. pg107

Yes. But my lonely is mine. Now your lonely is someone else's. Made by somebody else and handed to you. Ain't that something? A secondhand lonely. pg142
Posted by Trish at 5:00 AM

I've not read any Morrison. I know she is an important writer but I've always found her books intimidating. Was it hard to read?

I have the same apprehensions about her books and apparently Sula is a good one to start with so that's what I did. It was what I would call a comfortably challenging read. I had to pay attention but not so much that I didn't get into the flow of the story. I was pleasantly surprised how much I enjoyed her writing and am looking forward to reading more of her. I have Jazz and Paradise waiting for me on my TBR shelf. I'm crossing fingers that those will be as good.