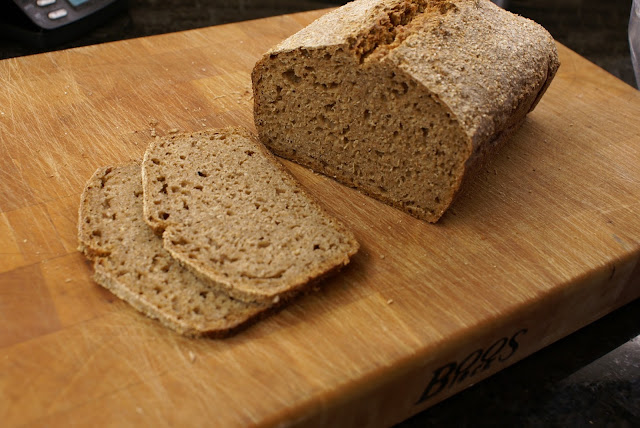 Ok so after fiddling around with ingredients and flours for my sourdough spelt bread, I think I finally found a combination that works and it's not that far off my original recipe. After years of making this with spelt flour, salt, starter and water, I wanted to try a few variations including a coarser stone-ground whole-grain flour. The first loaf with the coarser flour came out hard and tough, especially the crust. It was edible but I feared for my teeth. Next I added some olive oil to soften it up and it came out ok, softer but dense. The next loaf I added some molasses (for color and a touch of sweetness, like pumpernickel) along with the oil and it came out cakey; the taste was good but I didn't like the gummy texture. I'll have to work on this because molasses is a nice flavouring for dark bread. Stay tuned.

So now, for this latest loaf, I used the coarser flour with the inspired addition of MORE WATER to make it softer. It worked. Who knew? All it needed was a little extra time -20 min- to rest and absorb all the moisture those dry little ground spelt kernels wanted. The rise was good, as you can see from the picture, and the texture was firm but moist, chewy but light.

This moistening rest period is referred to as 'autolyse'  a practice recommended by most bread sites and something I tried last year but then abandoned. I don't know, mixing the salt and starter after the flour and water have been combined and rested never seemed to blend as well as when mixing them all together at once. So I tweaked the process by mixing everything together (along with adding extra water- like making risotto!) and then letting it rest before kneading. It worked well. The wet dough was now moist and workable and I was able to shape it into a spongy ball, happy and ready to rise overnight. The next morning it was puffed up enough to proof and bake like normal and out came this loaf. What I am happy about is that the change to stone-ground whole-grain spelt only affected the process slightly and produced the same reliable loaf, only better.

So it turns out that patience was the missing ingredient all along.

Email ThisBlogThis!Share to TwitterShare to FacebookShare to Pinterest
filed under: bread, cooking, life

Ha! And that's why I don't bake. I have no patience. Sigh!

Oh my. Unfortunately patience is what I lack!