Through the Window by Julian Barnes 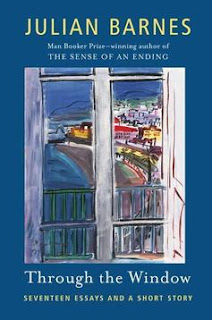 In Julian Barnes' newest book, Through the Window, the author takes a detailed look into the works of various authors, how they were influenced, and how, in some cases, they influenced the literary environment. I was thrilled to see some familiar names and references among the essays and to inevitably -given his scope of literary knowledge and experience- find some new ones. I was especially interested to read about Penelope Fitzgerald as I had only just recently come to know her work and have a copy of The Blue Flower still waiting for me on my to-be-read shelf. He speaks so highly of her and of that very book that I am quite excited to read it.

His essay on Translating Madame Bovary caught my interest as well. I have an old, battered copy of Madame Bovary on my shelf and it's one of the classics that I have been intending to read for a long time. Barnes' discussion of the confounding process of translating such a dated and classic work of fiction is really quite eye-opening. I don't think I'll ever read a translated work in the same way again. Such an intricate feat is deserving of an extra measure of respect for the translators, I think.

The two essays on Ford Maddox Ford came as a delightful surprise too. My reading of Hemingway and F. Scott Fitzgerald always had Ford as a sort of background figure and here Barnes pulls him out of the shadows to celebrate his often misunderstood books. I have no copies myself but I will certainly be looking out for them now to add to my library.

Edith Wharton's The Reef also gets an entire essay devoted to it, which is once again thrilling as I have that book waiting for me on my shelf as well. I was a little hesitant to read Barnes' essay as I didn't want to know too much about The Reef  before reading the book for myself. I went ahead and read the essay anyway and was not disappointed.

Julian Barnes is the author of 2011 Man Booker Prize winning The Sense of an Ending, also from Random House.

In these seventeen essays (plus a short story and a special preface, "A Life With Books), Julian Barnes examines the British, French, and American writers who have shaped his own writing, as well as the cross-currents and overlappings of their different cultures. From the deceptiveness of Penelope Fitzgerald to the directness of Hemingway, from Kipling's view of France to the French view of Kipling, from the many translations of Madame Bovary to the fabulousness of Ford Maddox Ford, from the "national treasure" status of George Orwell to the despair of Michael Houellebecq, Julian Barnes considers what fiction is, and what it can do. As he writes, "Novels tell us the most truth about life: what it is, how we live it, what it might be for, how we enjoy and value it, and how we lose it. (back cover)

Books will have to earn their keep - and so will bookshops. Books will have to become more desirable: not luxury good, but well designed, attractive, making us want to pick them up, buy them, think about them, give them as presents, keep them, think about re-reading them, and remember in later years that this was the edition in which we first encountered what lay inside. I have no Luddite prejudice against new technology; it's just that books look as if they contain knowledge, while e-readers look as if they contain information. (preface)

She had a novelist's (and shy person's) fear of being boringly informative: "I always feel the reader is very insulted by being told too much," she said. But it is more than just a taste for economy. It is the art of using fact and detail so that it becomes greater than the sum of its parts. pg10 (The Deceptiveness of Penelope Fitzgerald)

He seems to fall down a hole between late Victorianism and modernism, between a childhood of being dandled by Liszt and seeing Swindburne gambol, and a subsequent career as the avuncular facilitator of Pound, Hemingway and Lawrence. He also presented himself as an elderly party fading out before the new generation, which was probably a bad tactical move. pg42 (Ford's The Good Soldier)

'There are in this world only two earthly Paradises . . . Provence . . . and the reading room of the British Museum.' pg55 (Ford and Provence)

There had been previous attempts to catalogue and protect France's architectural history, most of them either compromised or half-hearted. If the French Revolution had been at times revengefully destructive, it also introduced for the first time the idea of officially conserving works of art and architecture. pg112 (The Man Who Saved Old France)

Imagine that you are about to read a great French novel for the first time, and can only do so in your native English. The book itself is over 150 years old. What would - should - do - you want? The impossible, of course. But what sort of impossible? For a start, you would want it to read as if it had originally been written in English - even if, necessarily, by an author deeply knowledgable about France. pg146 (Translating Madame Bovary)
Posted by Trish at 5:00 AM

This sounds absolutely wonderful... adding it to my Christmas list.

It's a great addition to any bibliophile's library! I hope you enjoy it.