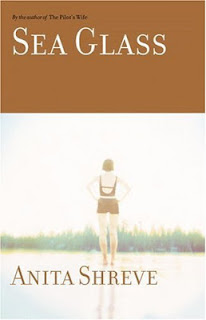 I'm always on a hunt for authors of current fiction who can take me away on well-written, escapist, not-too-taxing journeys, both historical and present-day, preferably with an assortment of titles to choose from. The thing is, I'm picky. I don't like flowery or overly ponderous writing, which, unfortunately, many writers today lapse into. I much prefer the tight and snappy writing of the F. Scott Fitzgerald kind, or Edith Wharton. But even so I need a break sometimes for variety's sake. I'd seen Anita Shreve's name come up now and again at the various book establishments I frequent, but had never opened one up until this weekend. I was in the mood for something 'sea' related and saw that Sea Glass was also set during the 1920s/30s - one of my favourite eras. I enjoyed her writing, liked her characters, and appreciated the details and thought she did put into her story. Not too much and not too little but juusst right. She's piqued my interest and I'm looking forward to sampling more of her work. I simply love discovering 'new' authors!

It is a house on the beach. Honora doesn't mind renting - despite its age and all its flaws, the old house is the perfect place for a new marriage. She and Sexton throw themselves into fixing it up, just as they throw themselves into their new life together. Each morning, Honora collects sea glass washed up on the shore, each piece carrying a different story in its muted hues.
Sexton finds a way to buy the house, but his timing is perfectly wrong. The economy takes a sickening plunge, and as financial pressures mount, Honora begins to see how little she knows this man she has married - and to realize just how threatening the world outside the front door can be.
Like those translucent shards that Honora finds on the beach, Sea Glass is layered with the textures, colours, and voices of another time. There is Vivian, an irreverent Boston socialite who becomes Honora's closest friend even as she rejects every form of convention. McDermot, a man who works in a nearby mill, presses Honora's deepest notions of trust - even as he embroils her in a dangerous dispute. And there's Alphonse, a boy whose openness becomes the bond that holds these people together as their world is flying apart. (inside flap)
Posted by Trish at 7:28 PM