Cleopatra: A Life by Stacy Schiff 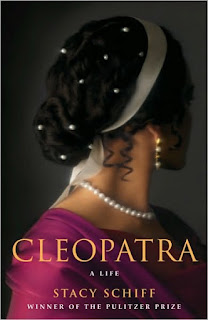 I didn't get into this as much as I thought I would, hence the brief review. It was a good and interesting read but a little more academic than I was prepared for, often reading more like a political textbook than a biography. Apparently there is so little known about Cleopatra herself that one can only really construct her life through the company she kept and the policies she affected as the queen of Egypt. The author does a thorough job of bringing forward a sense of Cleopatra's intelligence and influence. What a remarkable queen she was.

Apparently there's a movie adaptation in the works starring Angelina Jolie in the title role.

Her palace shimmered with onyx and gold but was richer still in political and sexual intrigue. Above all else, Cleopatra was a shrewd strategist and an ingenious negotiator. She was married twice, each time to a brother. She waged a brutal civil war against the first and poisoned the second; incest and assassination were family specialities. She had children by Julius Caesar and Mark Anthony, two of the most prominent Roman commanders of the day. With Anthony she would attempt to forge a new empire, in an alliance that spelled both their ends. Famous long before she was notorious, Cleopatra has gone down in history for all the wrong reasons; her supple personality and the drama of her circumstances have been lost. In a masterly return to the classical sources, Stacy Schiff boldly separates fact from fiction to rescue the magnetic queen whose death ushered in a new world order. (back cover)
Posted by Trish at 5:00 AM

It's a shame you couldn't fully get into it - I loved this book. I liked how 'serious' it was and all the little details. But I agree that the narrative element could have been stronger.

There was so much information in this book it was hard to keep it all straight without taking notes! It's funny, though, I keep going back and flipping through it; there's some pretty cool stuff I had no idea about.