The Serpent's Tale by Ariana Franklin 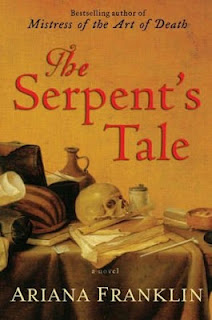 Another fun (albeit sometimes gruesome) historical, fictional mystery set in medieval England. I listened to this on audio just as I did with the fist book in this series The Mistress of the Art of Death. I was glad to see the same characters here teamed up again to investigate the poisoning of King Henry's favorite mistress Rosamond Clifford. But this story was a little heavier on the politics of the time than Mistress was, which for me isn't as enjoyable. I much prefer to hear about the details of every-day life in the twelfth century than I do about military alliances and whatnot. It was more interesting, instead, to follow Adelia's analytical thinking and common-sense as she used the tools at hand to solve the murders without giving herself away as a doctor, a punishable crime for a woman in her day. That alone makes a great story! Grave Goods is the next book in the series and I'll probably be throwing that on my iPod sometime soon to finish off the trilogy.

In twelfth-century England, Only one woman is trained to uncover the secrets of the dead. The mistress of King Henry II has been poisoned -  and Eleanor of Aquitaine, the king's estranged wife, is the prime suspect. The king must once again summon Adelia Aguilar, mistress of the art of death, to uncover the truth. But more is at stake than just the identity of a killer: civil war threatens to ravage an already war-sick England. Joining forces with her former lover Rowly Picot, Adelia investigates the death as more savage killings ensue. Isolated and trapped by snow and cold, Adelia works feverishly to save innocents and protect the peace. (back cover)
Posted by Trish at 10:47 AM

Hmm, I don't think either this or Mistress of the Art of Death is for me. It's a shame you didn't enjoy this one as much as the first one.

I glutted myself on these books; they're just delicious. I skipped over the political parts much as I would the bell peppers in pasta salad. :D

Sam - I often don't read series just for that reason. There's enough in these ones though to keep going - I just need some time in between.

Bookzilla - lol yes, skipping over is a totally reasonable thing to do.

Be warned when you come to number four, she left it as a cliff hanger and then died. Sorry, I don't mean that to sound as unsympathetic as it does, but it is nevertheless true.

LW - it's fun to have a go-to author, isn't it? Barbara Kigsolver is another one for me.

Alex - yes, I'd heard she'd died but didn't realize there was a fourth book. Thanks for the warning!