Stranger on a Train by Jenny Diski 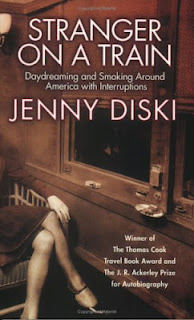 This one's been sitting on my shelf for AGES. I love memoirs, especially travel memoirs, but somehow I've been kind of *off* them lately, I don't know why. A couple of weeks ago, though, when I was out for a walk near the train tracks that run along the lake, I looked up as a train was rolling by and thought, Wouldn't it be cool to just get on and go . . . anywhere? Then I remembered I had this book. . .

See? That's what I love about my TBR shelf. I gather books from various sales and whatnot until such a time that a specific book on my shelf is exactly the one I must read Right Now. I love when this happens.

Reading this reminds me of just how much I like a good, well written travelogue. The author is funny and thoughtful and has me wanting to track down more of her many books, fiction and non-fiction. She is a fellow introvert and lover of solitude, so it was most interesting to read how she dealt with meeting strangers and making friends, as one can't help doing in such close quarters for long stretches of time. It's also the first time I'd read such an unabashed account of a smoker's need to engage in her habit. She is unapologetic about needing to find out, upon entering the train and establishing her seat, where the smoking car is. After that, come what may. She settles in to describing the people she meets and the passing scenery all as if she were sitting there with you. The author also shares a fair bit of her past growing up in Britain, where she still lives. Coming from a broken, neglectful home, she would skip school to spend the day on the subway reading books. She goes on to describe her rocky youth with stays in mental institutions, then how she became a writer, and where her life now, in her fifties, is going. It's a wonderful read.

In spite of the fact that her idea of travel is to stay at home with the phone off the hook, Jenny Diski takes a trip around the perimeter of the USA by train.


Somewhat reluctantly she meets all kinds of characters bursting with stories to tell, and finds herself brooding about the marvelously familiar landscape of America, half known already through film and television. Like the pulse of the train over the rails, the theme of the dying pleasures of smoking thrums through the book, along with reflections on the condition of solitude, and the nature of friendship and memories triggered by her past in a psychiatric hospital. (back cover)

I read voraciously. There was no need to look up to check which station we had arrived at, it made no difference to me. So I could keep my head buried (as Pam would say contemptuously) in a book. I got through my three books by the following morning unless I had chosen something I found unreadable. That was very rare. The fact that something could be read made it readable to me in those days. Books were where I lived, not because I was bookish, but because everyone has to have a place to go, and between the covers of books was mine. pg6

What I experience most with other people is my estrangement from them, the distance of a mutually unique separation that words or touch never quite bridge. Unlike cats, people interfere with my apprehension of reality, they muddy how I can know myself, confuse my understanding of how I am, which is centered around the notion that solitude is a state of perfection, and the the simplicity of being alone is the desired goal. pg69

The steward knocked and introduced herself as Ashley. Fresh coffee and orange juice would be available from six the next morning at the top of the stairs. Did I want a morning paper? Breakfast was served in the dining car from six-thirty to nine-thirty. Was I comfortable? Did I need anything? She was on duty all night, just let her know.
'Where can I smoke?' pg75

And, reader, I had passed my fiftieth birthday. I was too old to smoke in the lavatory, or directly under the air-conditioner, or in the boiler house. It was not so much the perceived lack of dignity of the surreptitious act, as the sense of ridiculous should I be found out. pg76

But what do I do with this view? I can attempt to describe what the eye catches, and try to nail down the strobing images in an approximation of words. So. The sky is vast and vacuously blue, the empty deserts at sunset threaten the spirit with their scrubby grey-green dying light, the rivers wind from bare trickles in parched earth to thunderous rushing torrents, the canyons dismay and dizzy you as you stare down into them and try to make out the bottom, the mountains loom in anthropomorphic shapes of things seen best in dreams, the grasslands and wheat fields wave like an endless syrupy ocean tickled into motion by the breeze. pg100

Check out the author's website.
Posted by Trish at 9:08 AM

This book sounds fantastic, will be putting this one on the wishlist, especially as I live right near the train tracks and often dream of getting on a train and escaping away from the mundane world of work.

This is a book for me!! Thanks for putting me on to it!

Sounds lovely. I'm adding it to my list :) Thanks for introducing me to this one.

I hope you all enjoy it as much as I did. Have you seen her website? She has more books too!!