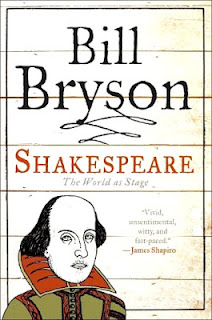 Another non-fiction audiobook that I thoroughly enjoyed. Shakespeare and his works are already interesting, yes, but I probably wouldn't have given the time to get so in depth if this weren't written by Bill Bryson with his signature wit and conversational tone. He covers everything from the life and times of Elizabethan England to the myriad scholars throughout the centuries who've tried to conclusively piece together one of the most storied, albeit elusive, men in literature.

Books like this, for me, are best taken in small amounts. Non fiction does sometimes have a tendency to drag and sound text-bookish, especially where so much research and history is involved. It's no problem, really, it just requires a different way of reading (or listening). When I have more than one book going, it's often because one of them is non-fiction such as this one. It might take a little longer to read, but a few chapters here and there with some fiction in between keeps me quite engaged and happy.
Posted by Trish at 7:02 AM

I'm not a a big biography reader, but I AM a big Bryson fan, and thus I read this a few years ago when it came out. I love Bryson's narrative style and his way of making interesting connections between two seemingly unrelated things.

I loved this too, Bryson has such a gift for making whatever he writes about interesting and engaging. I remember being shocked about how little we know about Shakespeare, especially that we don't even really know how to spell his name!

Bryson's the best, isn't he? He could write a SHOPPING LIST and I would read it!

I wish all my teachers in school had been as enthusiastic and amiable.

I learned a lot from this book. Although I have to admit, there's a lot I don't know:)