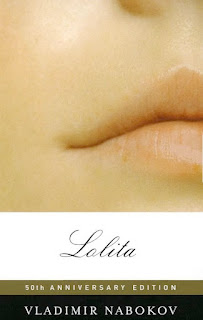 The whole reason books should not be banned is so that we, the reading public, can decide for ourselves how we feel about the stories we read. I do not appreciate some nanny-authority deciding for me, a fully functioning adult member of society with a working brain, what I should and shouldn't have access to. Retribution comes in the form of through-the-roof publicity, though, which the starched nannies must hate. Sucks being them. People just will not be imposed upon.

Good thing I live at a time when 'the authorities' have come to their senses and given credit to us lowly mortals for having the maturity to read controversial material.

Lolita! The mother of all controversial books finally found its way into my hands for a thorough perusal and what I found was most interesting. This is not a book about love but a book about a pathetically obsessive man and his muse, Dolores Haze. In his youth, Humbert Humbert lost his first girlfriend, Annabel, to typhus sending him into a grief-stricken life-long search to 'find' her again. Many, many ill-conceived relationships later, along with stints in mental institutions, he decides to move from Paris to The U.S. where, much to his delight, his American landlady's daughter turns out to be the very vision of his long ago boyhood love. The only problem is, she's twelve. Given his obsession and lack of self control, this doesn't turn out well for either of them. He spends the ENTIRE book waxing poetic about her lovely skin and the curve of her neck, finding ways to consume her with his eyes and, later, with his hands and body. She has no recourse! Her father is long dead and her mother dies shortly after Humbert's arrival. He lies to her, he kidnaps her, he possesses her completely all the while showering her with adoration and attention and gifts. Ugh. He basically treats her like an pet puppy. He knows what he's doing is wrong, and scolds himself for being so coarse and ugly, but then she'll flick her hair a certain way, or the light will catch her softness and he's all over her again, the brute. The fact that Lolita is made out to be a tease felt to me more like a construct of Humbert's deteriorating mind than anything in reality. Indeed he comes across as quite delusional in his hope that Lolita actually desires him, often describing himself as rather good looking and debonaire. He believes that under his guidance she will abandon her gum-chewing adolescent sulkiness and quickly attain maturity enough to appreciate the finer things in life. I kept having to remind myself that Lolita is the victim here, not Humbert in all his sorry sickness. The author has a way of messing with the reader's mind in probably much the same way as a perpetrator messes with the victim's mind. Clever guy, that Nabokov. The writing is very eloquent and lovely, full of poetic and literary references, many of them in French. It's all part of Humbert's ruse to win us over, I suppose, as this is written as his personal statement in his legal defense. There is also a fair smattering of dark humor that was a relief to encounter. Lolita is an indefatigable preteen with all the attitude and appetite for sweets, comic books, and cheesy movies. Humbert, on the other hand, is a pompous snob for whom nothing on this side of the Atlantic is cultured enough, especially the whims of a child. His descriptive distaste for practically every other human being is insulting, creative and sometimes downright funny. He only has to meet someone in passing and he already has them pegged as 'decrepit' and 'buzzard-like', the worst offenders being teenage boys as 'pimple-faced masturbators'. He feels duty-bound to protect *his* Lolita from the vulgar masses.

It's hard not to feel sorry for the poor guy, though. He needs help. He has a fixation that just cannot be resolved in a humane way. What I just don't get is the provocative book covers and lilting title font as if this is some sort of love story. This isn't a love story. Love and romance are between consenting adults and not the entrapment of a young girl. It's not even forbidden love as, say, between Rose and Jack in Titanic, whose only 'crime' was that they were from different social classes. Lolita is a cautionary tale about the lengths a wily creep will go to to satisfy his need. It's for exactly this reason that it should be on every school reading list. Forewarned is forearmed.

Tiger Tiger by Margaux Fragoso is a book (a memoir) written from a victim's point of view, also very interesting, enlightening, and heartbreaking.
Posted by Trish at 8:26 PM

Totally agree about Nabokov manipulating the reader - I found myself feeling sorry for Humbert at certain points but then felt appaled with myself! You almost believe his 'Lolita was a willing participant' line at certain points too, which is another clever trick of Nabokov's.

Interesting take. I finally picked this book up last fall 'cause I'd been condemning it in my mind without actually reading it, which didn't seem quite fair.

I was appalled throughout and never felt sorry for HUmbert, I'm afraid. So you and I differ on that particular point. But I wholeheartedly agree that nobody should be dictating what people are allowed to read this book!

I definitely need to read this book!It sounds so fascinating because it seems to be able to allow its reader a glance into a completely sick mind and from all I have heard it is very convincing.

And Titanic seems to be everywhere at the moment, not that I would mind :)

Sam - I'd be interested to read his other books. He's quite an author!

Crowe - it is indeed an appalling issue. Censorship is never a solution, especially concerning subjects like this.

Cassandra - yes indeed it does. Hopefully you will have a chance to read it sometime. As for the Titanic, it is the hundredth anniversary of its sinking, so it does seem to be in the news a lot lately.