The Brothers Karamazov by Fyodor Dostoevsky 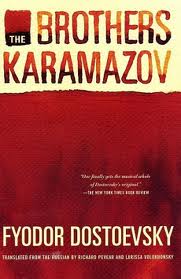 This book! People, this book is a workload and a half, let me just say. It is so packed with philosophical discussions, emotions, passions, religion, relationships and what it means to be human, that if you only had access to one book for the rest of your life, make it this book, The Brothers Karamazov. You know that feeling when something significant is happening but you're not quite absorbing it right away on account of it being so weirdly universe-shifting? You have to step back and take a breather before you can reassemble your neurons, take off your glasses, clean them, put them back on. Blink. For me, this book was like that. It was as confounding as it was enlightening, and not at all what I was expecting.

Okay, so. This is not a straightforward story about some brothers and their boorish father, but more a story about the inner struggles we all have as we try to find meaning in our existence and what our place is in the world. What do we mean to each other? If left to our own devices, are we innately good or evil? Dostoevsky has created these characters, I think, to expose the multiple sides of our psyches: Fyodor, the dad, is a loud compulsive liar with no apparent sense of responsibility, pride, or respect. He reminds me of Borat in an oafish, cringe-inducing, sometimes-funny-but-mostly-not kind of way. Most of us have the self control needed to not act out our most childish urges. Fyodor is immaturity personified.

Then there is the eldest son, Dmitri, who is similar to his dad, but toned down a notch. He is passionate, emotional and tempestuous, falling madly in and out of love but also struggling to control himself and find stability. He knows he needs to get a grip but it always seems to be juuusstt out of his reach. Something always comes up, ya know? In this way, he is at least more self aware than his father.

Next there's Ivan, the uber-rational middle son who needs to have logical explanations for everything. His main issue with life has to do with whether God exists or not. If he does exist, why does he allow cruelty and suffering, especially of children? If he doesn't exist, where does our sense of compassion and morals come from and why do we even have them? It's a conundrum he struggles with for most of the book until his father's murder pushes him over the threshold into insanity. In a purely rational world, his father's murder would be okay, and yet murder isn't okay. So what then? Is there a God, or isn't there? He is trying to rationalize what basically boils down to a mystery. Some things about life we just don't get to know. Period.

Moving on. Alyosha is the youngest brother and as kind and forgiving a young man as there ever was. At the beginning of the book he is a monk living in a monastery under the guidance of Zosima, a Gandhi-like elder who recognizes Alyosha's gift for compassion. Zosima urges him to leave the monastery so as to better encourage and support others (his immediate family, mainly) in a more understanding, gentle, and compassionate way. I loved this pay-it-forward theme. Long before there was a Gandhi or a Mother Theresa, there was, at least in Dostoevsky, a belief that goodness begets goodness, so why not start with the person nearest you. Alyosha is a more developed Myshkin from The Idiot, another Dostoevsky book that rattled my world. These two characters aren't meek in a weak sense - they're strong in a way we would all do well to aspire to.

Smerdyakov also needs mentioning. It is never officially acknowledged, but he is understood to be Fyodor's son, the product of Fyodor's rape of Lizaveta, a severely mentally disabled homeless young woman who dies shortly after giving birth. How awful is this guy? Anyway, Smerdyakov, an epileptic, is raised by Fyodor's servant couple, Grigory and Marfa, as their own. Fyodor, of course, taking no responsibility for his actions except to assume Smerdyakov's employment as a house servant. Smerdyakov is a mean-spirited sort who, after long discussions with Ivan about how illogical religion and morals are, resolves to murder their father. He is the skeleton in the closet, here, and don't they often have a way of making their presence known?

I realize that I have only just barely scratched the surface of this incredible book/author. One could indeed write a thesis paper on each of these characters and themes. There is SO MUCH in here it's impossible to take it all in in one go. Crime and Punishment and The Idiot were both pretty straightforward stories in comparison and there is a definite similarity here to both. It's as if in writing The Brothers Karamazov, Dostoevsky combined and expanded these two previous novels into one.

Having said all that, I have a few personal stylistic issues. This being a 19th Century Russian novel, there is a lot of melodrama and meandering from the story line that I found most tiresome. I didn't mind the philosophical discussions, it was the ponderous pace of the story that got to me. There would be bursts of action and then pages and pages and pages of detailed backstory that were just laborious. Modern impatience, perhaps. There really is a lot going on in this book, taking on some very weighty existential issues that really couldn't be explored in any other way. It is what it is. Confounding, exasperating, and probably the most moving book you'll ever read.

I read The Brothers Karamazov in my final semester of high school and again in my final semester of college. Those were huge times to be thinking about big questions, and this book definitely made an impression. You're right that it's a moving work and you can't help but be affected by it. I think I should read it every four years and see how I feel about it each time. Thanks for the review!

Ohhhh. Groan.....I was going to put Crime and Punishment down as my next Dostoevsky. This is a great review, so maybe this should be my next one? I can't believe how much I'm enjoying the novellas by Russian authors that I'm reading through.

Shannon - This book would be perfect for multiple readings. I plan to keep a permanent copy on my shelf for exactly this reason. Even just to pull out and read certain parts again. I feel like I missed some of the finer points this first time around.

Helen - I would go ahead and read Crime and Punishment first, and The Idiot too if you can. I'm glad I did. This book is very much an in-depth continuation of both. those stories.

Trish, this is not a book for me - I struggled with Crime & Punishment when I was about 15 and have been put off Doestoevsky ever since. I'm glad you got so much out of it though :)

Sam - Fifteen is quite young for Dostoevsky. Maybe you could give him another try sometime?

This book is my one great regret. I started it and did not finish (about ten years back).

I had a university professor that was adamant that the three most important literary works in Western Civilization were The Bible, The Qu'ran and The Brothers Karamazov.

Perhaps I'm old enough and bold enough to give this book the reading it deserves. Great review!

Ryan - Yes! Give it another try. It's challenging but certainly quite readable. That's interesting, what your professor said about Western literature . . .

Thanks Trish! That helps with the choices.