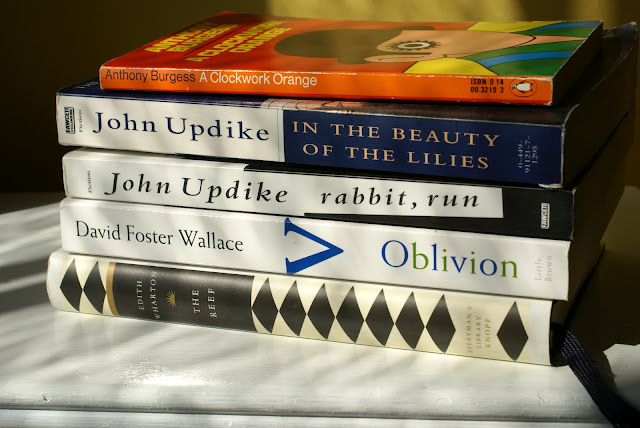 I arrived early for a doctor's appointment today and there was a used book store nearby, so . . .

A Clockwork Orange is a dystopian story I'd rather read than watch. I couldn't stomach the movie years ago so, the book. And having been once banned, it's a must read! Wallace and Updike are such pillars of the literary world, I really need to get to know them better. Weren't they once banned too? Even better. I like stoking my bookshelf with some controversy. And Edith Wharton . . . what's not to love? I got to know her through her short stories and Age of Innocence. I'm still looking for a copy of House of Mirth, which at this point will only show up in a used book store since it is out of print. So far no luck. I've never heard of The Reef, though. Maybe it's one of her lesser-known treasures just waiting for me to discover.
Posted by Trish at 8:04 PM

Leslie (Under My Apple Tree) said...

Nice finds. I felt the same about Clockwork Orange. Maybe reading it would be a better experience.

yes, and it's so short too! It seems like it would be an easy afternoon read. Better than a nighttime read. . . gah! I'm expecting it might give me the creeps.