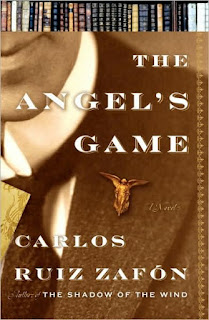 Sinister, dark, and mysterious, The Angel's Game has layers and twists that don't seem like much at first but . . .  More than that I can't say for fear of giving too much away. Read it carefully. Savor it. It's very much like The Shadow of the Wind, only darker and more edge-of-you-seat suspenseful. The Cemetery of Forgotten Books even makes an appearance here, and how cool was that place? I am always so taken by how much Zafon *gets* booklove as both this and Shadow revolve around literature, writers, bookshops, books, mystery and secrets. I don't think I've ever come across so many references to the 'perfume' of paper and ink as I have in these two stories. Both books are hard to put down once you start reading. There's something so captivating about the story, the interesting characters, and the tangible scenery, that it really would be most enjoyable to read in one sitting, a daunting task at 500+ pages, I know. But if at all possible . . .

In an abandoned mansion at the heart of Barcelona, a young man, David Martin, makes his living by writing sensationalist novels under a pseudonym. The survivor of a troubled childhood, he has taken refuge in the world of books and spends his nights spinning baroque tales about the city's underworld. But perhaps his dark imaginings are not as strange as they seem, for in a locked room deep within the house lie photographs and letters hinting at the mysterious death of the previous owner.


Like a slow poison, the history of the place seeps into his bones as he struggles with an impossible love. Close to despair, David receives a letter from a reclusive French editor, Andreas Corelli, who makes him the offer of a lifetime. He is to write a book unlike anything that has ever existed - a book with the power to change minds. In return, he will receive a fortune, and perhaps more. But as David begins the work, he realizes that there is a connection between his haunting book and the shadows that surround his home. (back cover)

I decided that my existence would be one of books and silence. pg 59

Article one: the first time somebody comes here he has the right to choose a book, whichever one he likes,  from all the books there are in this place. Article two: upon adopting a book you undertake to protect it and do all you can to ensure it is never lost. For life. Any questions so far? pg127

It's up to you how you waste your time and money. I'm staying here to read. Life's too short. pg186

Ah, intellectuals. And you wanted me to sign one up. Why is it that the less one has to say the more one says it in the most pompous and pedantic way possible? pg 227

He held the shop door open and showed me in. I stepped into the bookshop and breathed in that perfume of paper and magic that strangely no one had ever thought of bottling. pg318

Just bought it based on your previous recommendation and that review I mentioned. Looking forward to a good read!

Great! I hope you enjoy it as much as I did.

I'm ashamed to say I've not read any Zafron, even though I own Shadow of the Wind. You make this one sound very good :)

I'm in love! I get the feeling that reading Zafon is like wrapping yourself up in a warm blanket and drinking something silky and warm.

Sam & Bookzilla - He's very much a mood/atmospheric writer. Dark alleys and strange goings-on are sometimes just what I'm looking for in a weekend read.

I think I want to read this just for the book love.

Great review, and tempting quotes! I really enjoyed Shadow of the Wind and am looking forward to reading this one too, soon-ish I hope!

Alexis - I know, right? Even the cover is lovely.

Melwyk - I actually think I enjoyed this one better than Shadow! I hope you enjoy it too.