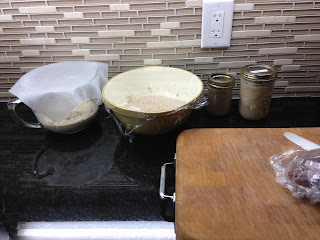 Meet the troops. I mixed these sponges (one cup flour to 1/3 cup starter with enough water to make a batter) last night before bed and left them on the counter to get busy doing what microbes do. They are covered in plastic to keep the moisture in and the flies out. 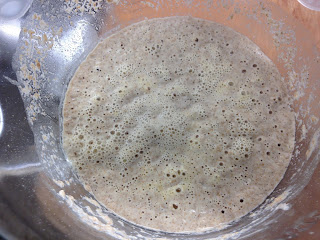 Check out the action on the spelt sponge!  Nice work, spelt.

Each bread gets similar treatment but the different flours respond differently. I didn't get a picture of the whole wheat sponge in the bowl but it puffed up rather than foamed like the spelt, probably due to the tougher gluten holding everything in. The wheat dough can tolerate a little more handling than the spelt. Spelt is more delicate and really appreciates a lighter touch. Each one gets a light kneading in the bowl with the addition of a little extra kneading on the counter for the wheat. I like a wetter dough so I have to use a scraper on the counter to keep it all together instead of sticking to everything. 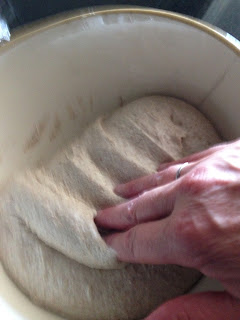 Both doughs like to be kneaded in on themselves right there in the bowl. 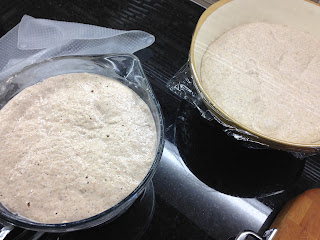 Settle down, fellas. After several hours of rising in a warm kitchen, I had to put these guys in the fridge to calm them down as I was not ready to bake them until tonight. You can see the difference between the doughs here. Spelt on the left has a thinner consistency as opposed to the wheat on the left which is more solid. 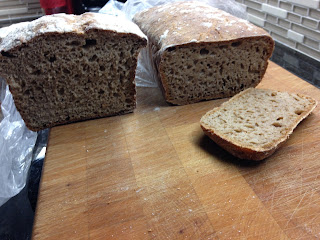 And here we are. Wheat (also mixed with some rye) on the left and spelt on the right. The bubbles are quite large because of all their vigorous rising earlier today. Baking in the summer presents its own special challenges. A long rise gives the bread a better developed flavour but the added warmth makes everything go too quickly. The spelt loaf is a little flat because I only put 3 cups of flour into the sponge instead of the usual four. Next time.
Posted by Trish at 10:37 AM

Email ThisBlogThis!Share to TwitterShare to FacebookShare to Pinterest
filed under: bread, cooking, photos

I'm impressed. (And spelt is a great word.)

I can think of so many things I would like to do with those loaves: lovely!

Bread baking is quite a science. Those loaves look great.

I love to bake bread. I need to bravely try this!

Hey, I'm loving your posts that include a bit of other things, such as this about baking bread! Have you read any of the Bread series books by Judith Ryan Hendricks? They are wonderful. I'm reading the third, and I think final, one. You can find them anywhere online and in bookstores. The first is "Bread Alone" - 2002, then "The Baker's Apprentice" - 2006, and then Baker's Blues - 2015.