The Inconvenient Indian by Thomas King 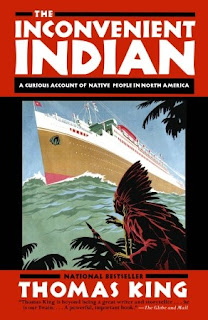 'A Curious Account of Native People in North America'

The Inconvenient Indian by Thomas King was at once a heartbreaking, infuriating, frustrating and very much enlightening history lesson on the plight of North American Natives from the early days of European settlements through today.

Thomas King makes no apologies for being opinionated and makes it very clear that '. . . although The Inconvenient Indian is fraught with history, the underlying narrative is a series of conversations and arguments I've been having with myself and others for most of adult life . . . .' Making it like listening to a long, albeit heavily backed up, rant. I appreciate the depths of the research that must have gone into the writing of this book, and really, it gives me a whole new perspective on some of the more familiar stories and a window into some history I had no idea about. I am truly humbled.


Stylistically, the author's use of humour is tilted toward the ironic and sarcastic. He even says, at the end of the book in his interview with CBC Radio's Shelagh Rogers, "But I think that you have to work with your reader, and not just brutalize them with facts, even if the facts are legitimate concerns. And sometimes a little satire goes a long way. Sometimes looking at a tragic moment through a particular angle provides a bit of humour and deepens the tragedy at the same time. Makes it more powerful." So, yes, his humorous angle certainly has an impact; I probably wouldn't have stuck with it had it read like a dry, factual history book. But in reality I still had to give myself regular reading breaks because his satire just never lets up. Tragedy mixed with humour is a challenging mix.

All the different flavours of seventeenth-century Christianity featured a deity who might hurt you as a way of demonstrating his love. While the hardware of civilization - iron pots, blankets, guns - was welcomed by the Native people, the software of Protistantism and Catholicism - original sin, universal damnation, atonement, and sublimation, was not, and Europeans were perplexed, offended, and incensed that Native peoples had the temerity to take their goods and return their gods. pg24

For Native people, the distinction between Dead Indians and Live Indians is almost impossible to maintain. But North America doesn't have this problem. All it has to do is hold the two Indians up to the light. Dead Indians are dignified, noble, silent, suitably garbed. And dead. Live Indians are invisible, unruly, disappointing. And breathing. One is a romantic reminder of a heroic but fictional past. The other is simply an unpleasant, contemporary surprise. pg66

Now the only question was what to do with this Indian. What could North America expect of this Indian? What might be the Indian's place, if any, in the new order? With proper guidance, what might this Indian become? These questions and their answers would form the backbone of what we call "Indian Policy". pg83

Francis Xavier, the co-founder of the Jesuit Order, is supposed to have said, "Give me a child until he is seven and I will give you the man," but, frankly, any fool could have figured that one out. It's what advertising is about, the training of generations of consumers who will remain loyal to particular products. And whether you like the idea or not, religion and culture are products. Just like hot dogs and frosted cereals. pg110

The school was a long list of regulations, which were enthusiastically and martially enforced, and it contained an assortment of miseries and indignities passed out like treats at a party. I had never been hit at home, but, at Christian Brothers, I got my knuckles cracked with a ruler for talking in class and swatted across the shoulders with a wooden pointer for having a smart mouth. I was whacked across the backs of my thighs for a variety of offences and kicked once for not leaving the recreation room fast enough. But, all in all, it was minor stuff. Not much worse than you'd expect from a fraternity hazing. Or a mugging. pg111

Today is a new day. Let's enjoy it together.
This is a great sentiment.  I like it. Maybe it is time for Native people - such a me - to stop complaining about the past. Better yet, maybe it's time to get rid of the past together.
How about 1985?
That was the year my second child was born. Let's draw a line with that year. I'll gather up all of North American Indian history prior to 1985, pile it in a field, and set it on fire. Get rid of everything. Massacres, deprivations, depredations, broken treaties, government lies. pg159

And while we're on the subject of Native Failings, I should probably own up to the alcoholism, drug abuse, poverty, crime, and corrupt leadership that plague many of the reserves and reservations. The news media have certainly been helpful in bringing these matters to public notice, and I salute the fifth estate for their simple-minded diligence. By now you should have some sense of the history that has made these such complicated problems. Nevertheless, the solutions, in the end, remain our responsibility. pg164

What happens next is complicated, illegal, and sleazy. But, given the history of Indian affairs, not unexpected. The states, along with federal government and private interests, made it quite clear that while tribes might have the legal right to run gaming enterprises on their reservations, that right could be tied up in the courts until hell froze over. What we need, tribes were told by the powers that be, is a compromise.
Compromise is a fine word. So much more generous than blackmail. pg178

Land has always been a defining element of Aboriginal culture. Land contains the language, the stories, and the histories of a people. It provides water, air, shelter, and food. Land participates in the ceremonies and the songs. And land is home. Not in an abstract way. pg218
Posted by Trish at 9:43 AM