Z, a Novel of Zelda Fitzgerald by Therese Anne Fowler 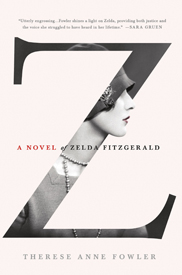 I listened to this on my iPod for my morning walks the last couple of weeks and really enjoyed it. The narration is good and the story is interesting, engaging and a little heartbreaking. After discovering my love of F. Scott Fitzgerald's books a few years ago, and really, my love of all things literary from the early 1900s, I knew I wanted to learn more. Many of his stories are taken from his real-life experiences so naturally I was interested to read about his wife Zelda. Who was she? What was her perspective on the events that shaped their lives and why was their relationship so tumultuous?

It was also interesting to get her perspective on their time in Paris and Scott's friendship with Ernest Hemingway as portrayed in Hemingway's A Moveable Feast. In that book, Hemingway is not very flattering of the Fitzgeralds, depicting them as somewhat comic. I was never really sure that that was true or fair. The author here suggests the same. Both Scott and Ernest were complicated, sensitive and tormented alcoholics with an incredible talent for story telling. Facts, I guess, were sometimes optional.

The book covers a lot of ground and sheds some light on this often misunderstood literary figure and her own struggles with alcoholism and mental illness. As much as the roaring 20s seemed like fun times, women's lives were still very much prescribed. Zelda's yearning for an artistic outlet in writing, painting and dancing were soundly discouraged, deemed as distractions from her duties as a wife and mother. It made me furious to hear her husband and doctors tell her these activities were what was making her sick and that she must stop. Would that she could have had access to today's more enlightened attitudes and treatments.

I had been on the fence about reading Paula McLean's The Paris Wife about Hadley Hemingway for some reason. Perhaps because I'm not as fond of her husband as I am of Zelda's, but now having read and been thoroughly intrigued by Z, I'm diving right into Paris Wife and pretty much enjoying that too. It'll be so very interesting to compare both women's experiences.


(back cover)
Picture a late May morning in 1918, a time when Montgomery wore her prettiest spring dress and finest floral perfume - same as I would wear that evening…. Thus begins the story of beautiful, reckless, seventeen year-old Zelda Sayer on the day she meets Lieutenant Francis Scott Key Fitzgerald at a country club dance. Fitzgerald isn't rich or settled and he wants, of all things, to be a writer in New York. No matter how wildly in love they may be, Zelda's father firmly opposes the match. But when Scott finally sells his first novel, This Side of Paradise, Zelda defies her parents to board a train to New York and marry him in the vestry of St. Patrick's Cathedral. Life is a sudden whirl of glamour and excitement: Everyone wants to meet the dashing young author of the scandalous novel - and his beautiful, perhaps even more scandalous wife. Zelda bobs her hair, trades in her provincial finery for daring dresses, and plunges into the endless party that welcomes the darlings of the literary world to New York, then Paris and the French Riviera. It is the Jazz Age, when everything seems new and possible - except that dazzling success does not always last. Surrounded by a thrilling array of magnificent hosts and mercurial geniuses - including Sara and Gerald Murphy, Gertrude Stein, and the great and terrible Ernest Hemingway - Zelda and Scott find the future bot grander and stranger than they could have ever imagined.
Posted by Trish at 5:00 AM

I have the audio from the library and was hoping to start it soon. Glad you enjoyed it.

My daughter has the print edition and is having a hard time getting into it. Was planning to borrow it, but maybe audio is the way to go... especially since I enjoyed listening to The Paris Wife.

Diane & JoAnn - Yes, I think the audio is best for this one. As I was listening, I was wondering if I would have liked it as much in print.