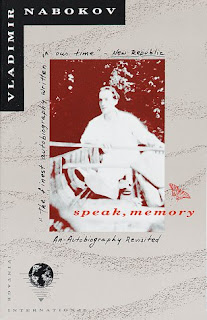 Vladimir Nabokov is an author whose writing I adore so much I really must find and read All The Books.  Speak, Memory, is his autobiography, a collection of essays and reminiscences from a full and very privileged youth spanning some of the most tumultuous decades of the last century. French was spoken around his home as easily and freely as his native Russian, with German and English soon to follow. His evocative detail of places, objects and people along with his dry wit are such a delight to behold there really is no wonder his work is so often referenced. It's also quite remarkable how learned and distinguished he was in his adult life. With a Cambridge education and teaching positions at the most eminent universities, one would be hard-pressed to find a more authoritative, literary master.

So, this book. Most of it is very interesting and readable if one is inclined towards literary biography and early 20th century history; however, he lost me with his in-depth naturalist descriptions of butterflies, and his penchant for studying and analyzing strategic chess moves. Although I have somewhat more of an interest in nature than I do in chess, I don't think there's anything lost in skimming those chapters. The rest, though, is splendidly engaging.

Speak, Memory, first published in 1951 as Conclusive Evidence and assiduously revised in 1966, is an elegant and rich evocation of Nabokov's life and times, even as it offers incisive insights into his major works, including Lolita, Pnin, Despair, The Gift, The Real Life of Sebastian Knight, and The Defense.

One of the twentieth century's master prose stylists, Vladimir Nabokov was born in St. Petersburg in 1899. He studied French and Russian literature at Trinity College, Cambridge, then lived in Berlin and Paris, where he launched a brilliant literary career. In 1940 he moved to the United States, and achieved renown as a novelist, poet, critic, and translator. He taught literature at Wellesley, Stanford, Cornell, and Harvard. In 1961 he moved to Montreaux, Switzerland, where he died in 1977. (back cover)

The old and the new, the liberal touch and the patriarchal one, fatal poverty and fatalistic wealth got fatalistically interwoven in that strange first decade of our century. pg30

My numerous childhood illnesses brought my mother and me still closer together. As a little boy, I showed an abnormal aptitude for mathematics, which I completely lost in my singularly talentless youth. pg36

From Batovo, the old rutty road (which we have followed with Pushkin and now retrace) ran east for a couple of miles to Rozhestveno. Just before the main bridge, one could either turn north in open country toward our Vyra and its two peaks on each side of the road, or else continue east, down a steep hill past an old cemetery choked with raspberry and racemes and cross the bridge toward my uncle's white-pillared house aloof on its hill. pg64

Form Frankfurt we arrived in Berlin in a snowstorm, and next morning caught the North-Express, which thundered in from Paris. Twelve hours later it reached the Russian frontier. Against the background of winter, the ceremonial change of cars and engines acquired a strange new meaning. An exciting sense of rodina, "motherland," was for the first time organically mingled with the comfortably creaking snow, the deep foot-prints across it, the red gloss of the engine stack, the birch logs piled high, under their private layer of transportable snow, on the red tender. pg96

The process of bathing took place on another part of the beach. Professional bathers, burly Basques in black bathing suits, were there to help ladies and children enjoy the terrors of the surf. Such a baigneur would place the client with his back to the incoming wave and hold him by the hand as the rising, rotating mass of foamy, green water violently descended from behind knocking one off one's feet with a mighty wallop. pg148

An American dentist - Lowell or Lowen, I do not remember his name exactly - ripped some of our teeth out and trussed up others with twine before disfiguring us with braces. Even more hellish than the action of the rubber pear pumping hot pain into a cavity were the cotton pads - I could not endure their dry contact and squeak - which used to be thrust between gum and tongue for the operators's convenience. pg204

On March of 1919, the Reds broke through in northern Crimea, and from various ports a tumultuous evacuation of anti-Bolshevik groups began. Over a glassy sea in the bay of Sebastopol, under wild machine-gun fire from the shore (the Bolshevik troops had just taken the port), my family and I set out for Constantinople and Piraeus on a small and shoddy Greek ship Nadezhda (Hope) carrying a cargo of dried fruit. pg251
Posted by Trish at 2:50 PM

Skimming is sometimes an essential tool.
The only Nabokov I've read is Lolita, although I am interested in reading more by him.

The creepy subject matter combined with Nabokov's writing and characterization make for such an excellent book. It would never have worked as well in anyone else's hands.