Pigs in Heaven by Barbara Kingsolver 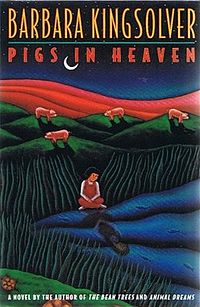 I'm finally getting to this sequel to The Bean Trees after I don't know how many years. I loved The Bean Trees and always knew I would eventually read Pigs in Heaven, the continuing story of Taylor Greer and her adopted Native American daughter, Turtle. They're both lovely stories and can certainly be read as stand-alone books.

Without giving the ending away, I'll just say that this book had me on pins and needles the whole time. In Pigs in Heaven, Kingsolver goes to great lengths to portray the two sides in this cross-cultural adoption, a subject full of discussion potential. I found myself disagreeing, though, with the belief that children should be placed 'with their own kind, culture, race, ethnicity, religion' etc etc etc. No. In cases of adoption I believe a child should be placed where the love and bond is the strongest regardless of race and culture. Perhaps I'm naive, but love, especially that initial, trusting, childhood love for one's parent or guardian, is far and away more important in establishing the future stability and compassion in that child than arbitrarily placing him or her in whatever culture he or she may have originated. There is always time to catch-up with ones family of origin if that's what a child wants to do once they are old enough to make that decision. But that bond, that love, a child has for their primary guardian in the early years should not be interrupted. Putting culture before love, putting anything before love, just promotes separation. The world will be a better place when we can actually practice the blindness of love, interacting with one another respectfully and compassionately regardless of looks or beliefs.

Interestingly enough there is an article in yesterday's paper about Gerry Davis, a man who proclaimed himself a Citizen of the World, and that nation-states were the cause of all our present conflicts. I would also add that any organization whose mandate is to separate themselves from others, or have others stay away from them, is what leads to racism, prejudice, discrimination, and war. We should be spending our energy supporting and encouraging each other because underneath all that posturing, aren't we all in need of the same things?

(back cover)
When six-year-old Turtle Greer witnesses a freak accident at the Hoover Dam, her insistence on what she has seen and her mother's belief in her lead to a man's dramatic rescue. But Turtle's moment of celebrity draws her into a conflict of historic proportions. The crisis quickly envelopes not only Turtle and her mother, Taylor, but everyone else who touches their lives in a complex web connecting their future with their past. A deeply felt novel of love despite the risks, of tearing apart and coming together, Pigs in Heaven travels the roads from rural Kentucky and urban Southwest to Heaven, Oklahoma, and the Cherokee Nation. As this spellbinding novel unfolds, it draws the reader into a world of heartbreak and redeeming love, testing the boundaries of family and the many separate truths about the ties that bind

It's a pleasant read. I like her writing very much. It's just also very throughout provoking.

We are reading FLIGHT BEHAVIOR for our August book club read. We won the book in a contest on TLC Book Tours.

I read this one a long time ago. I do enjoy Kingsolver, and have been meaning to read Prodigal Summer - this summer.

Elizabeth - Her books are great for book clubs. They always have so much to talk about!

Dinae - Prodigal Summer is one of my favourites of hers.

All thumbs! That is supposed to read 'Diane'.