Mennonite in a Little Black Dress by Rhoda Janzen 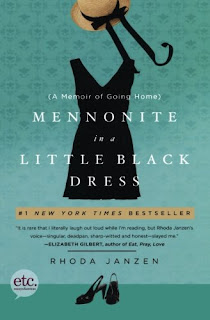 I had been trying to get into this book for the better part of a month, picking it up and putting it back down again in favour of something else. I guess I just wasn't in the mood. Anyway, when I finally did get around to reading it through I was so thoroughly enamoured with her voice and language and making-lemonade-out-of-life's-lemons attitude that I put it right next to Cheryl Strayed's Wild on my memoirs-to-keep bookshelf. Some people are turned off by her seemingly glib and superior take on the Mennonite culture, but I find her words are suffused with love and admiration too. She's no more poking fun at them than she is at her own foibles, which is as it should be, I think. There are far too many people taking themselves far too seriously already that a little levity is a refreshing thing.


Not long after Rhoda Janzen turned forty, her world turned upside down. It was bad enough that her husband of fifteen years left her for Bob, a guy he met on Gay.com, but that same week a car accident left her seriously injured. Needing a place to rest and pick up the pieces of her life, Rhoda packed her bags, crossed the country, and returned to her quirky Mennonite family's home, where she was welcomed back with open arms and offbeat advice. (Rhoda's good-natured mother suggested she get over her heartbreak by dating her first cousin - he owned a tractor, see.)
Written with wry humour and huge personality - and tackling faith, love, family, and aging - Mennonite in a Little Black Dress is an immensely moving memoir of healing, certain to touch anyone who has ever had to look homeward in order to look ahead. (back cover)
Posted by Trish at 5:00 AM

I've been tempted by this book... it even came up as a possible book club selection once. Glad to hear that you were finally able to settle in and enjoy it!

I was kind of on the fence at first but then I really enjoyed it. I hope you'll like it too. It's a good one for discussion!

I love it when I stick with a book and end up enjoying it. Sometimes it's simply not the right time for the read.

Yes, that's true. When I'm struggling with a book, I give it a few attempts before I call it one way or the other because timing also has a lot to do with my enjoyment of it. There are some books, though, that I can feel in my bones just won't make the cut no matter what I do and those are the ones I have to DNF.