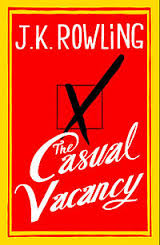 This is going to be more of a gush than a review. I absolutely loved everything about this book. Loved it. I know next to nothing about the Harry Potter stories, or even about the author, so I really went into this as somewhat of a JK neophyte. I had no expectations other than what I could glean from the cover, which I thought looked bright and whimsical; I couldn't have been more wrong. The story is a gritty social commentary with a smattering of dark humour. It has many characters and a complex assortment of relationships, as one has when living in a close-knit community. Everyone knows everyone else to some degree, be it teacher/student, doctor/patient, employer/employee, parent/child, school friends, coach, neighbour, social worker, lawyer, town councillor etc. 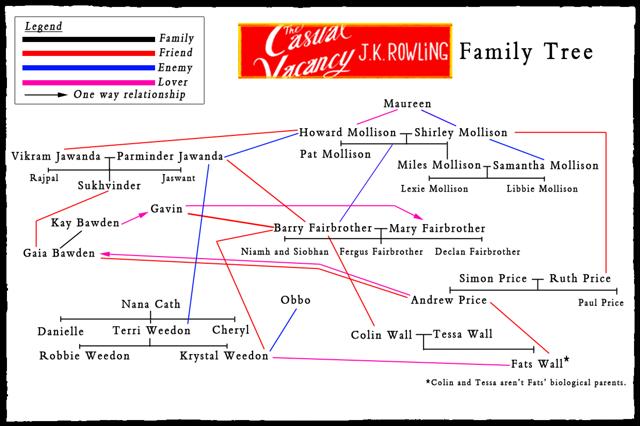 There are enough relationships and personal histories here to make Tolstoy proud. I would even go so far as to say this story reminds me remarkably of Anna Karenina, with tragic heroine and dysfunctional families and all. It was that good.

It pained me to read all the tepid reviews; I can't think of a reason for them other than the fact that Harry Potter is an impossible act to follow, so of course any subsequent books JK writes are going to be 'flops'. She has nerves of steel to even attempt it.

Some of the complaints I've heard are that most of the characters are not particularly 'likeable', whatever that means. Quirky, different and flawed is how I find them, and isn't that what makes a story compelling? I'd rather read about villains and underdogs than people who are 'nice'. The various themes (addictions, OCD, poverty) are said to be too bleak leaving the reader with a sense of hopelessness at the end. Ehn. I don't know. It's social commentary. It's ongoing. It's challenging, yes; it shook me up quite a bit but I didn't find it hopeless. In fact I have huge respect for JK for delving into such issues with the depth and compassion which she did. I found her portrayal of the subjects remarkably sensitive.

Part of my affinity for this book could also be that I listened to it on audio with Tom Hollander doing a fantastic job reading all the parts. His inflections, accents and timing are bang-on and has me searching the internet for any other audiobooks he's narrated (A Clockwork Orange!). I want them all. And as for JK? I don't think I could hold a contemporary author in higher esteem.

When Barry Fairbrother dies in his early forties, the town of Pagford is left in shock. Pagford is, seemingly, an English idyll, with a cobbled market square and an ancient abbey, but what lies behind the pretty facade is a town at war. Rich at war with poor, teenagers at war with their parents, wives at war with their husbands, teachers at war with their pupils…Pagford is not what it first seems.
And the empty seat left by Barry on the parish council soon becomes the catalyst for the biggest war the town has yet seen. Who will triumph in an election fraught with passion, duplicity, and unexpected revelations. (back cover)
Posted by Trish at 5:30 AM

I was interested to read your review of this. I've read other reviews of this book that weren't very favorable, so I liked hearing the other side. I haven't read this, but am curious about it.

It's definitely worth a try. The subject matter and language is coarse at times, but I found the story just so absorbing.

Nice review. I hope you don't mind that I've linked to it on my blog.

Interesting. I've heard such mixed reviews on this. I was happy to read your review.

Priya - Thanks! Sure, go ahead and link away. I don't mind at all. I'm just so glad to find someone else who likes the book as much as I do.

Alexis - After all the bad press it got I was so surprised to actually like it.