Good to a Fault by Marina Endicott 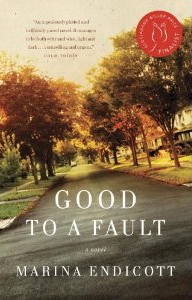 Marina Endicott's Good to a Fault is an excellent portrayal of the psychology going on just under the surface of the supporter/supported relationship. It's often hard to know what the *right* thing is to do in any given volunteer situation, but the urge to help, and the emotions involved, can sometimes turn out to be bafflingly contradictory. When an action is well intended but then misunderstood or dismissed by the recipient, one has to remember to a) not take it personally and b) to realize that help can sometimes be resented as a debt the recipient now has to carry perhaps adding to an already difficult and unbalanced life. It is glib to think that it will all be a straightforward, feel-good relationship. It exposes the awkward idea of why we want to help in the first place, that help is unavoidably selfish on some level with an end result that can lead to a feeling of superiority.

And still we, Clara, feel a responsibility to do something, anything, to help people in need because to do nothing would be giving up and that would be unacceptable.

Endicott writes a compelling story putting this awareness into play. Her characters are well drawn and believable, from Clara's evolving concept of compassion to the children's antics and need for stability and love. Lorraine, Clayton and Mrs Pell, too, are major contributors to Clara's conflicting ideals. The author's writing is clear and evenly paced without the over dramatization that can sometimes be found in books involving such emotionally charged social issues. The only character I found annoyingly intrusive is Paul, Clara's love interest. Perhaps including a romance into the mix helps Clara realize her own vulnerability. Also, the last twenty or so pages included a large reunion picnic was an event I felt went on far longer and in far more detail than was necessary. The story would have done well to end before this event as it seemed somewhat forced and out of place. Other than that, Good To A Fault is an enjoyable and thought-provoking read - great for discussion!

In a moment of self-absorption, Clara Purdy's life takes a sharp left turn when she crashes into a beat-up car carrying an itinerant family of six. The Gage family had been traveling to a new life in Fort McMurray, but bruises on the mother, Lorraine, prove to be late-stage cancer rather than remnants of the accident. Recognizing their need as her responsibility, Clara tries to do the right thing and moves the children, husband and horrible grandmother into her own house - then has to cope with the consequences of practical goodness.

What, exactly, does it mean to be good? When is sacrifice merely selfishness? What do we owe in this life and what do we deserve? Marina Endicott looks at life and death through the compassionate lens of a born novelist: being good, being at fault, and finding some balance on the precipice.

"This is not your family, Clara, that's what troubles me. You don't owe these people anything."
These People. Pearce clutched to her side, sliding on the blouse under her jacket, his little fist tightening to keep her with him. "It's my responsibility. Whether real or imagined doesn't matter." pg127 [This really is a universal question, isn't it?]

Because of the shape of the rooms it was like sneaking into a house, but a dream house, a bookhouse. Rickety shelves climbed to the ceiling in every room and crowded down the middle. In the kids' book room Dolly sat on the floor under the dirty window, in what had once been the bathroom. You could still see where the bathtub had been ripped out. Before she looked up she had read half an old paperback called The Children Who Lived in a Barn, about a girl who looked after her brothers and sisters when their parents disappeared and they had no money. pg130 [I love depictions of children discovering refuge in books and bookstores.]

His feet beat at her abdomen, his fists hurled lightning at the sky, or at least the gold-charged ceiling, and when she picked him up he twisted his head to a horrifying angle so he could still stare upwards, until she had to see the flooding light he was seeing. All the things she wouldn't notice without the children to point at them like hunting dogs. pg210 [Anyone who's spent time around toddlers and small children will totally get this.]

Her head hurt with the effort of not thinking how stupid she had been to take all these people on, how bad she had proven to be at all this. But there was no way to get out of it. pg215

…she read all the time, at lunch and at home. Vanity Fair was like everything, like her life only clearer. She loved it from the very first moment when Becky gets a dictionary after all, and then she throws it back. She was as good a liar as Dolly.
After Vanity Fair she had more books, like insurance: the whole stack left to go. It was as if all books had suddenly unlocked, and now she understood everything. pg238 [I love this girl! What reader doesn't remember that *first* real book.]

Clary blinked. She was not good. She got what she wanted by manipulation and sweetness and good grooming. There was no good in her. She wanted Pearce back. She had selfishly wanted him the whole time, and then Trevor, and finally even Dolly, and what had she done? pg353
Posted by Trish at 7:23 AM

This book sounds great. I couldn't see what award it had received. I guess I need to look that up.

It was a Giller Prize finalist. It is a really good book!