Paris: The Novel by Edward Rutherfurd 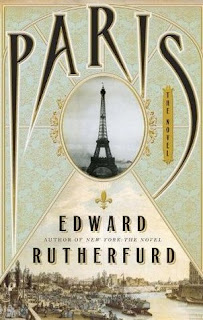 I've never read anything by this author before, but given my appetite for historical fiction AND non-fiction it was only a matter of time. Edward Rutherfurd's Paris: The Novel is thoroughly engrossing! It's a huge and sweeping, fantastic book. What a great way to learn about the history of such a storied place as Paris. We follow families through the ages as they go about their lives dealing with all the social issues of the day. I appreciated the 'lessons' incorporated into into the dialogue as one character explains some bit of history or piece of policy to another character. And since there were opposing  loyalties and traditions at various times throughout history, these exchanges were either applauded or condemned depending on which characters we are reading about. It brings the past into the present in such an engaging way I can wholeheartedly recommend Paris: The Novel to anyone looking for an absorbing read. There is one downside, though. Since there is so much story packed into this book, I wish the chapters had been truly chronological rather than alternating between ancient and recent history.

I'm looking forward to reading some of Rutherfurd's past books: London, Sarum, and The Forest sound especially interesting.

The novel opens in La Belle Epoque, a golden age of peace and joie de vivre. Moving back and forth in time across centuries, the story unfolds through intimate and vivd tales of self-discovery, divided loyalty, passion and long-kept secrets of characters bother fictional and real, all set against the back-drop of the glorious city - from the summit of Montmartre to the Gothic towers of Notre Dame to the Grand Boulevards.
The nobel family de Cygne has served king and country through the ages and claims descent from the hero of the celebrated poem The Song of Roland. The Le Sourds come from humble beginnings and embody the ideals of the French Revolution and the Paris Commune. The Gascon brothers are from the dangerous slums behind Montmartre, but while one goes to work building the world's most recognizable icon - The Eiffel Tower - the other makes a living in the sinful underworld of Pigalle, near the famed Moulin Rouge. The Blanchards lost everything during the reign of Louis XV but rose again in the age of Napoléon and wind their place among the middle class of urban sophisticates who helped establish Paris as the great centre of art , literature, and style that it is today.
We follow these families through good times and bad, as they come of age, seek their fortunes, and fall in and out of love - from the building of Notre Dame and the waning days of Cardinal Richelieu and the bloody religious conflict between Catholics and Huguenots; from the glittering court of Versailles to the violence of the French Revolution and the turmoil of the Paris Commune; from the hedonism of the Belle-Epoque and the heyday of impressionists to the tragedy of the First World War and the 1920s, when the writers of the Lost Generation could be found drinking at Les Deux Magots; from the heroic efforts of the French resistance to the student revolt of 1968.
With his unrivaled blend of impeccable research and narrative verve, Rutherfurd weaves an extraordinary tapestry that captures the medieval world of saints and scholars, just as it captures the modern French ideals of liberté, égalité, fraternité. More richly detailed, more thrilling, and more romantic than anything Rutherfurd has written before, Paris: The Novel is a tour de force that brings the sights and scents, and tastes of Paris to sumptuous life. The City of Light and Love awaits you . . . (back cover)

The year 1789 was more than a revolution. It was the birth of Freedom itself. Liberty, Equality, Fraternity: these are the noblest ideas that men can have. The ancien régime fought against them, so the Revolution cut off their heads. It was absolutely necessary. But more than that. The Revolution released us from the prison that the Church had made. The power of the priests was broken. People were free to deny God, to be free of superstition, and follow reason. It was a great step forward for mankind. pg13

Those who rose in the Church enjoyed the revenues of its vast estates. A bishop was a powerful man, and lived like a prince. Great churchmen could provide money for their families, and help them in every way. The vow of celibacy didn't appeal to Roland. But fortunately, despite their vows, many bishops had left illegitimate children. The Church provided the educated class, and the great administrators of the crown. For a clever fellow, the Church was a way to fortune. pg47

Many nations had known glory in their history, but perhaps none had felt it so keenly as the nation of France: for monarchists, the glory of the Sun King; for republicans, the glory of the Revolution; for soldiers and administrators, the glorious victories of the emperor Napoléon. pg91

And though of course he did not love Father Xavier in the same way that he loved his father, he sometimes preferred the priest's advice. Father Xavier was clever, certainly. Yet even in if he could not follow the many turnings of the priest's subtle mind, he always sensed that behind everything Father Xavier said and thought there lay absolute certainty. The rules by which the priest lived were fixed and eternal. pg95

It seemed to him that the tower must be falling behind schedule. Eiffel's assistant engineers would sometimes be fretful. Thomas would see them shaking their heads. He knew from the drawings he'd seen that the massive span between the ground and the platform was to be finished with an elegant semicircular arch across the outside edge. Yet as April wore on and the pylons climbed into the sky about the platform, the whole of the tower looked a mess. But whatever was passing in his mind, Eiffel himself was always calm, polite, serene. pg179

The Moulin Rouge was a work of genius. It had been going for only a few years, but it was already a legend.
It was to be found at the foot of the hill of Montmartre, on the broad and leafy boulevard de Clichy that effectively marked the frontier where the serried order of Baron Hausmann's Paris met the steep chaos of Montmartre. It occupied a former garden plot sandwiched between two respectable, six-story blocks, its large street-level front forming one edge of a platform. And upon this platform rose an almost full-scale model windmill, painted bright red. pg257

"Yet in the last thirty years," Roland remarked, "the radical parties have achieved so many of their aims." He ticked some of them off. "There is little chance of either a monarchy or a Bonapartist military government. Every man has the vote. There is free public education for every boy and girl - I may not see the necessity, but it is so. And education is in the hands of the state, not of the Church. Even the traditional independence of the ancient regions of France, it seems to me, is being eroded by your bureaucrats in Paris. As one who loves France, this also saddens me. But all these changes are not enough for you?"
"They are a beginning. That is all." pg439

"Paris has always prided itself on being home to revolutionary thought. Ever since the French Revolution, we believe that all radical ideas belong to us. And people with radical ideas have always come to Paris to discuss them." pg 547
Posted by Trish at 1:06 PM

This sounds like the kind of history I love!

I've been meaning to read this one, but haven't yet. You post/review reminds me to move it up the stack.