In a Sunburned Country by Bill Bryson 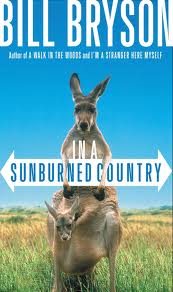 Thus, alas, I have come to the end of my Bill Bryson library. I have no more. I've now read them all. Well, actually, he does have two more academic books on writing and grammar I have not yet read, but they are more of the reference sort than the curl-up-and-read-for-pleasure sort. But, then, given my less-than-superb command of the intricacies of English grammar, I would probably do well to add these last two books to my library.

Anyway, back to In a Sunburned Country. Although this book is fairly dated having been written in the late 1990s, it's still loads of fun and so, so interesting. As always, Bryson incorporates facts, history, lore and culture as he takes us along with him on a tour through Australia. His writing is very engaging, conversational and in most cases so spot-on that reading him is just plain enjoyable.

In this deliciously funny, fact-filled adventure, Bill Bryson takes his readers on a rollicking ride far beyond the beaten tourist path of Australia. Here is a place where interesting things happen all the time, from a Prime Minister lost - yes, lost - while swimming at sea, to Japanese cult members who may (entirely unnoticed) have set off an atomic bomb on their 500,000-acre property in the great western desert. Wherever he goes  (and Bryson goes just about everywhere) he finds Australians who are cheerful, extroverted and unfailingly obliging - the beaming products of a land with clean, safe cities, cold beer and constant sunshine. Australia is an immense and fortunate land, and it has found in Bill Bryson its perfect guide. (back cover)

The great if obvious feature of a train, as compared to a hotel room, is that your view is ever changing. In the morning I awoke to a new world; red soil, scrubby vegetation, huge skies, and an encircling horizon broken only by an occasional skeletal gun tree. As I peered blearily from my narrow perch, a pair of kangaroos, flushed by the train, bounded across the foreground. It was an exciting moment. We were definitely in Australia now! pg25

It is a lame and obvious conclusion to draw, but Australia truly does exist on a unique scale. It's not just a question of brute distance - though goodness knows there is plenty enough of that - but of incredible emptiness that lies within all that distance. Five hundred miles in Australia is not like five hundred miles elsewhere, and the only way to appropriate that is to cross the country at ground level. I couldn't wait to see more. pg44

I ended the day at Young, a farming town in plum and cherry country forty miles down the Olympic Highway from Cowra in the direction of Canberra. I got a room in a motel on a side street not far from the town centre. The owner, a fit-looking fellow in shorts and a short-sleeved shirt, read my name off the registration card and said, "G'day Bill. Welcome to Young," and gave my hand a powerful shake as if inducting me into a secret society. The friendliness of Australians - all of it quite sincere and spontaneous, as far as I could tell - never ceases to amaze and gratify. pg82

Wandering through shady side streets, however, I found a secondhand bookshop open and was happy to take that as a consolation prize. Probably because new books have always been expensive in Australia, the country has outstanding secondhand bookshops. pg130

The outback does have dirt tracks in relative abundance, 300,000 miles of them altogether, but standard rental cars aren't allowed on them and even in a fully equipped off-road vehicle it is a brave or foolhardy driver who ventures out on his own because it is so easy to get lost or stranded. pg197

The sea snakes are especially unnerving, not because they are aggressive, but because they are inquisitive. Stray into their territory and they will come to check you out, all but rubbing against youin the manner of cats seeking affection. They are the most sweet-tempered creatures in existence. But cross them or alarm them and they can hit you with enough venom to kill three grown men. pg250

[re:Ayer's Rock, now known as Uluru]
In some odd way that you don't understand and can't begin to articulate you feel an acquaintance with it - a familiarity on an unfamiliar level. Somewhere in the deep sediment of your being some long-dormant fragment of primordial memory, some little served tail of DNA, has twitched or stirred.....

....Quite apart from that initial shock of indefinable recognition, there is also the fact that Uluru is, no matter how you approach it, totally arresting. You cannot stop looking at it; you don't want to stop looking at it. pg274-75

I asked him if there was still much prejudice in Australia and he nodded. "Huge amounts," he said. "Really quite huge amounts, I'm afraid."

Over the past twenty years, successive governments have done quite a lot - or quite a lot compared with what was done before. They have restored large tracts of land to Aboriginal communities. They have returned Uluru to Aboriginal stewardship. They have spent more money on schools and clinics. They have introduced the usual initiatives for encouraging community projects and helping small businesses get started. None of it this has made any difference at all to the statistics. Some have gotten worse. At the end of the twentieth century an Aboriginal  Australian was still eighteen times more likely to die from an infectious disease than a white Australian, and seventeen times more likely to be hospitalized as a result of violence. pg292

Australia is mostly empty and a long way away. Its population is small and its role in the world consequently peripheral. It doesn't have coups, recklessly over-fish, arm disagreeable despots, grow coca in provocative quantities, or throw its weight around in a brash and unseemly manner. It is stable and peaceful and good. It doesn't need watching, and so we don't. But I will tell you this: the loss is entirely ours. pg325
Posted by Trish at 5:00 AM

I like Bryson's writing a lot. My favorite was The Life and Times of the Thunderbolt kid. Being about the same age as Bryson, I could relate to that memoir.

Yes, that was my favourite one too. I grew up in the 70s but I could still very much relate to what he wrote about. He has an incredible grasp of the quirks and wonders of childhood.

My favorite was A Walk in the Woods. Wish he'd do some more travel books. I've read all of those.