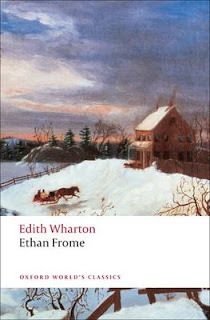 There's a reason why Ethan Frome is considered one of the classics of western literature. It takes the magic of a skilled author such as Edith Wharton to tell such an atmospheric tale in only 175 pages. The New England winter coming off these pages put me in want of a blanket and hot drinks the whole time I was reading. The characters, too, are incredibly well drawn in the fewest possible words. (I know of a few old-school Victorian authors who could learn a thing or three about concise writing from the likes of Wharton. Big themes can also come in small packages, is all I'm saying.)

I liked Ethan from the very beginning and felt for his predicament. He made some unwise choices, yes, but never lost sight of his obligations to his community and to his sickly wife, Zeena. It quickly becomes evident, though, that theirs is not a happy marriage. Zeena is an unfriendly and disagreeable sort whose neediness is almost pathological. She isn't so much sickly as hypochondriac. So when Zeena's young cousin Mattie comes along as hired help, Ethan becomes quietly besotted imagining a better and happier life if only Mattie were by his side instead of Zeena. It's a dilemma he scarcely knows how to resolve without jeopardizing his conscience.

Speaking of Russian authors, this story reminds me somewhat of Dostoyevsky's The Idiot with Ethan playing the part of the kind and easygoing Myshkin. There's an urge to see both of these overly tolerant characters grow a backbone and stand up to their detractors. But confrontation isn't always the answer; graciously playing the hand one is dealt can be a sign of strength too, even if that hand is the result -as in Ethan's case- of a disastrously ill-conceived exit plan.

Ethan Frome is an an excellent read even just for the setting and sublime writing. There is much more to find within the story too if you really want to sink your teeth into it.

Ethan Frome works his unproductive farm and struggles to maintain a bearable existence with his difficult, suspicious, and hypochondriac wife, Zeena. But when Zeena's vivacious cousin enters their household as a 'hired girl', Ethan finds himself obsessed with her and with the possibilities for happiness she comes to represent. In one of American fiction's finest and most intense narratives, Edith Wharton moves this ill-starred trio toward their tragic destinies. Different in both tone and theme from Wharton's other works, Ethan Frome has become perhaps her most enduring and widely read book (back cover)

All the dwellers in Starkfield, as in more notable communities, had had troubles enough of their own to make them comparatively indifferent to those of their neighbours; and though all conceded that Ethan Frome's had been beyond the common measure, no one gave me an explanation of the look in his face which, as I persisted in thinking, neither poverty nor physical suffering could have put there. pg11

The village lay under two feet of snow, with drifts at the windy corners. In a sky of iron the points of the Dipper hung like icicles and Orion flashed his cold fires. The moon had set, but the night was so transparent that the white house-fronts between the elms looked gray against the snow, clumps of bushes made black stains on it, and the basement windows of the church sent shafts of yellow light far across the endless undulations. pg26

He had taken to the girl from the first day, when he had driven over to the Flats to meet her, and she had smiled and waved to him from the train, crying out, 'You must be Ethan!" as she jumped down with her bundles . . . pg33

Zenobia's fault-finding was of the silent kind, but not the less penetrating for that. During the first months Ethan alternately burned with desire to see Mattie defy her and trembled with fear of the result. pg60

Ethan's love of nature did not take the form of a taste for agriculture. He had always wanted to be an engineer, and to live in towns, where there were lectures and big libraries and 'fellows doing things.' pg71

The name threw a chill between them, and they stood a moment looking sideways at each other before Mattie said with a shy laugh, 'I guess it's about time for supper.' pg83

He turned to the shelf about the chimney, groped for matches and lit the one cable in the room. At first its weak flame made no impression on the shadows; then Zeena's face stood grimly out against the uncurtained pane, which had turned from grey to black.
It was the first scene of open anger between the couple in their sad seven years together, and Ethan felt as if he had lost an irretrievable advantage in descending to the level of recrimination. pg112

He fell asleep, and when he woke the chill of the winter dawn was in the room. He felt cold and hungry, and ashamed of being hungry. He rubbed his eyes and went to the window. A red sun stood over the grey rim of the fields, behind trees that looked black and brittle. He said to himself: 'This is Mattie's last day,' and tried to think what the place would be without her. pg135
Posted by Trish at 5:00 AM

I liked Ethan Frome a lot, and actually had just read it for the first time a few years ago.

I'm always so amazed how little books like this escape my attention for so long.

I've read The Touchstone, her novella. Have you read any other books by her? Do you suggest I start with this one instead of House of Mirth?

I've only just recently discovered her. I read The Age of Innocence and really liked it but I have not read House of Mirth yet, so I don't know which one you should start with. Ethan Frome is certainly a good one, though.