Don't Let's Go to the Dogs Tonight by Alexandra Fuller 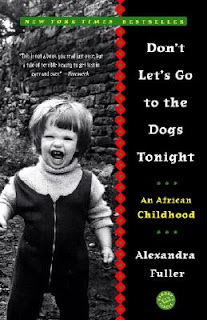 I listened to it as an audiobook and was thoroughly entranced by the author's harrowing, starkly beautiful childhood in 70s and 80s Africa. Her writing put me in mind of Mary Karr's The Liar's Club and Jeannette Walls' The Glass Castle, and Augusten Burrough's Running With Scissors. Why Don't Let's Go to the Dogs Tonight didn't get the same kind of press I have no idea. I loved this book so much I had to have a print copy to add to my bookshelf collection along with her newest Cocktail Hour Under the Tree of Forgetfulness. If you like memoirs at all, you must read Alexandra Fuller. She's a wonderful, wonderful writer.

In Don't Let's Go to the Dogs Tonight, Alexandra Fuller remembers her African childhood with candor and sensitivity. Though it is a diary of an unruly life in an inhospitable place, it is suffused with Fuller's endearing ability to find laughter, even when there is little to celebrate. Fuller's debut is unsentimental and unflinching but always captivating. In wry and sometimes hilarious prose, she stares down disaster and looks back with rage and love at the life of an extraordinary time. (back cover)

Mum won't kill spiders because she says they help to keep the rats down (but she rescued a nest of baby mice from the barns and left them to grow in my cupboard, where they ate holes in the family's winter jerseys). Mum won't kill scorpions either; she catches them and lets them go free in the pool and Vanessa and I have to rake the pool before we can swim. We fling the scorps as far as we can across the brown and withering lawn, chase the ducks and geese out, and then lower ourselves gingerly into the pool, whose sides wave green and long and soft and grasping with algae. And Mum won't kill spiders because she says it will bring bad luck. pg4

Usually on nights when Mum is sober, and we are kissing her good night, she turns her face away from us and puckers her lips sideways, offering us a cheek stretched like dead-chicken skin. Now that she is drunk and telling me about Adrian she is wet all over me. Arms clasped over my shoulders, she is hanging around my neck, and I can feel her face crying into the damp patch on my shoulder. She says, "You were the baby we made when Adrian died." pg32

We loaded up two cats called Fred and Basil and three dogs called Tina, Shae, and Jacko, and we drove, our worldly possessions balanced perilously on the roof of our car, clear across Rhodesia from flat west to convoluted east. We stopped to fill up the petrol tank, drink Cokes, and buy bags of Willard's chips ("Make music in your mouth"). Everyone, dogs included, was let out for a pee on the side of the road, behind the bougainvillea bushes. pg48

We buy a 1967 mineproof Land Rover, complete with siren, and call her Lucy. Lucy, for Luck.
"Why do we have the bee-ba?"
"To scare terrorists."
But Mum and Dad don't use the siren except to announce their arrival at parties. pg55

Vanessa and I, like all the kids over the age of five in out valley, have to learn how to load and FN rifle magazine, strip and clean all the guns in the house, and, ultimately, shoot-to-kill. If we are attacked and Mum and Dad are injured or killed, Vanessa and I will have to know how to defend ourselves. pg74

I want to be like an army guy, so I clean and load my dad's FN and my mum's Uzi with enthusiasm, but the guns are too heavy for me to be anything but a stick insect dangling from the end of a chattering barrel. I have to prop the gun up against the wall to shoot it, or the kick will knock me over. I am allowed to shoot my mum's pistol, but even that cracks my wrist, and my whole arm jolts with the shock of its report.
Vanessa has to be forced to strip and clean the gun. She is slow and unwilling even when Dad loses his temper and shouts at her and says, "Fergodsake don't just stand there, do something! Bunch-of-bloody-women-in-the-house."
Vanessa gets her cat-hooded, African deadpan, not-listening eyes.
"You have to learn how this thing is made," says Dad.
"Come on, take the bloody thing apart."
Vanessa moves slowly, reluctance personified.
"Now you must put it back together," says Dad, looking at the gun.
Vanessa blinks at Dad. "Bobo can do it."
"No, you must learn."
"I'll do it. I'll do it," I say. I want to do it to show my dad that I'm as good as a boy. I don't want to be a bunch-of-bloody-women-in-the-house. pg75

We shudder up the washboards on the ribby Mazonwe road in the dull light of a thick African sunset and then, as we turn up the Robandi farm road, it is dark. African night comes like that, long rich sunsets and then, abruptly, night. The cooler night air is releasing the scents trapped by a hot day; the sweet, warm waft of the potato bush; the sharp citronella smell of khaki weed; raw cow manure; dry-dust cow manure. We bump over the culvert at the bottom of our road (in which the big snake lives) and head up toward the house, which is a pale unlit mass in the evening light. pg118

And then, the year I turn eight, I am too old for a nanny anymore. I am ready for boarding school. I get my own trunk with my full, proper name, "Alexandra Fuller," printed on the top.
"But I thought my name is Bobo."
"Not anymore. You're Alexandra now. That's your real name."
Dad takes a photograph of us leaving the farm for my first day of big school in January 1977. pg138

I can hear the men around the campfire singing softly, taking it in turns to pick up a tune, the rhythm as strong as blood in a body. The firelight flickers off the blue and orange tent in pale dancing shapes and there is the sweet smell of the African bush, wood smoke, dust, sweat. My bones are so sharp and thin against the sleeping bag that they hurt me and I must cover my hip bones with my hands.
I make a vow never to leave Africa. pg179

"Come inside," says the man in English. He speaks quickly to his wife in Chnyanja and she disappears into the hut. "Please, we have some food. You must take your lunch here." pg235